A terrorist attack, strike, riot, civil commotion and other types of politically motivated unrest can directly and indirectly affect businesses and human lives. Modern day terrorism is multifaceted and constantly evolving in its nature. An insurance policy cannot save lives, but it can provide for financial remedy to business owners to help them restore damaged property and recover quickly, to minimize financial losses resulting from business interruption or loss of rent or loss of attraction.

For many insurance buyers in Europe Terrorism and Political Violence Insurance remains a niche coverage, although it is often required by financing banks or investors. Despite major events such as 9/11 or Paris attacks, markets have not really seen a significant uplift in demand or price. The approach has changed only a few days after the invasion of Ukraine. Many businesses are looking to buy the coverage and are prepared to purchase it at higher costs. Active war in Ukraine has forced the market to shrink, but it remains largely intact.

Critical infrastructure assets, such as energy and communication, are typically considered high risk. But also, other industrial objects and commercial real estate are often targets of terrorist attacks. Needless to say, that the nature of the risk itself has evolved over the past few decades. Due to high interconnectivity of modern economies, significant financial losses can occur even without a physical damage.

Whilst terrorist attacks, including active assailant or "active shooter" events, are becoming less frequent in certain regions, politically motivated violence or unrest and war is currently on the rise. Such events can cause enormous damage to property and interruption to businesses. Strikes, riots, civil commotions and malicious damage caused by individuals or groups often result in destruction of property and looting. Business owners may even become liable to third parties if they fail or neglect to implement safety and protective measures to safeguard life and property of others which is an exposure insurable under terrorism liability, a line of insurance not widely known.

The policies are written on "named perils" basis, which means that specifically named perils or events are insured. The coverage is granted to specifically scheduled and named property and gross profit. It is recommended to purchase policies on "new for old" basis. Underwriters will require a policy limit, which acts as a Combined Single Limit for property damage and business interruption.

The following coverages are available either separately or as a package: 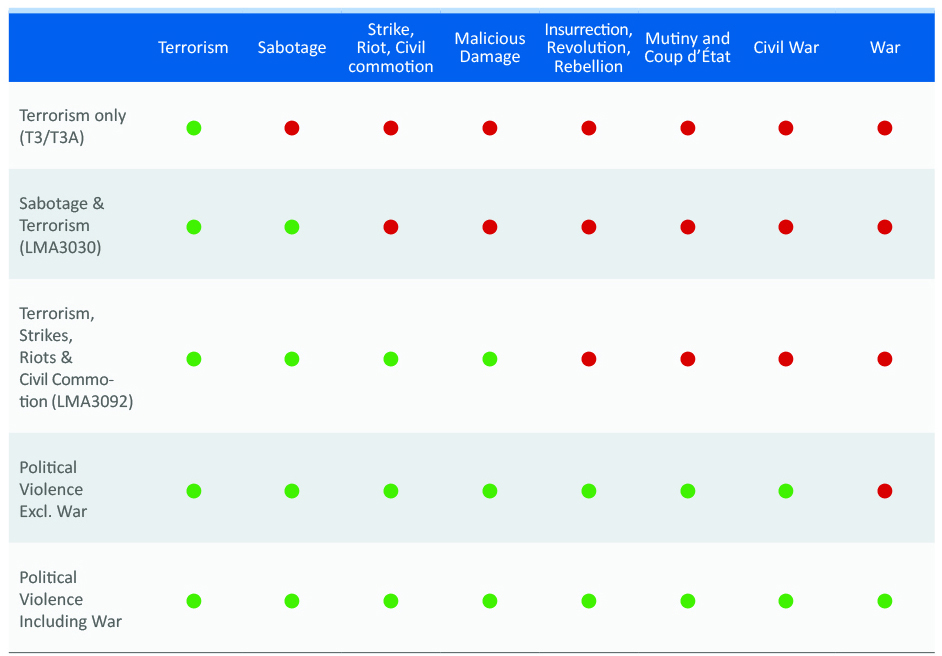 There are specific exclusions of course. The aim is to draw clear lines with other, conventional property damage and business interruption coverages and avoid overlaps. Herewith, few key exclusions:

Loss or damage arising from: Standard Coverage does not cover:

In addition to the above-mentioned coverages, there are a number of coverage extensions available, such as:

Risk analysis is very important to understand all possible scenarios in order to create a tailor-made solution. The aim is to minimize the impact of a loss event. We can help you to analyze what might happen after a terrorist attack, political unrest or war. Typically, Terrorism and Political Violence risks are excluded from Property & Construction policies although SRCC (Strike, Riots and Civil Commotion) coverage may be offered by insurers with a sub-limit. But those covers are often subject to a special right of contract termination by the insurer at any time.

We recommend conducting a policy check in order to identify and avoid coverage gaps.